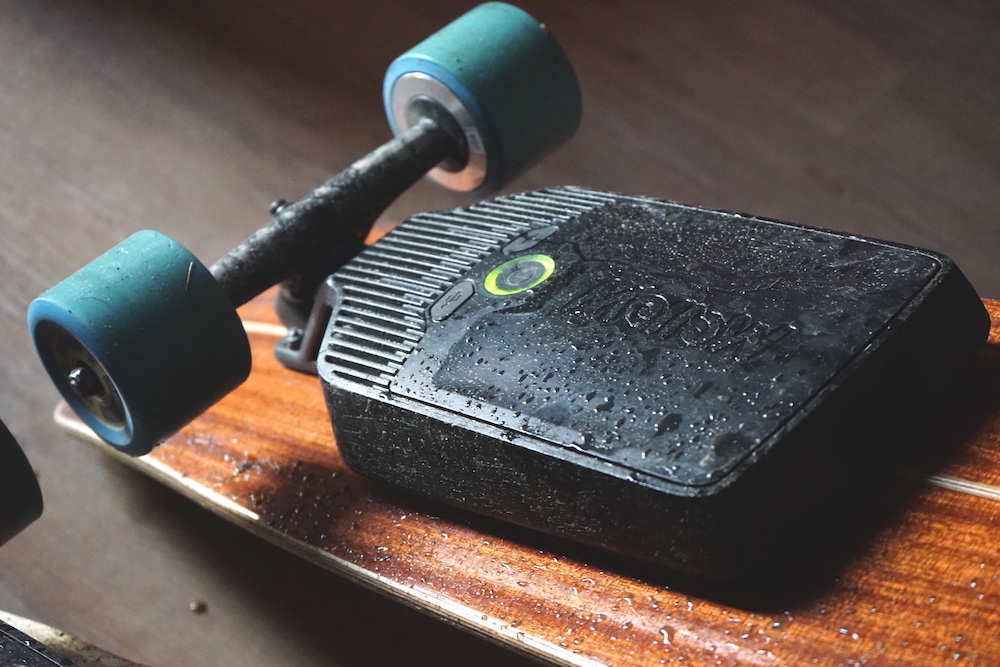 Even though it’s tempting to ride in the rain, you need to know if your electric skateboard can handle water or not. If it can’t, you could fry your board or get stuck in a rainstorm.

Not every electric skateboard can be used in the rain.

Even though the boards say they are waterproof, it seems there is a limit.

Let me tell you a story.

I rode my Ownboard Mini KT from school to the train station when it was pouring rain. It said “water resistant” on the board, so I thought it would be fine.

I cleaned and wiped down my board when I got home. I saw that the battery life and power were no longer being shown on the digital screen.

I tried to turn it back on, but all it did was light up green. I could see that there were water droplets inside the screen’s protective shell.

The next day, when I tried to turn on my board, it wouldn’t work… Then my $450 Ownboard Mini KT broke…

My dad and I took the board apart to look at the motor and battery. When the “watertight battery compartment” was taken apart, a small amount of water leaked out.

That was the trouble… The electrical parts of the battery were broken because water got inside.

In the end, I had to buy a new battery from Ownboard’s website, which cost me about $80 and took longer to ship.

On that rainy day, I was riding my board through puddles that splashed water all over it.

If I had gone riding when it was foggy and raining, I probably would have been fine.

If you’re not sure if you and your board are both safe to ride, it’s probably best not to take your e-board out.

Take this tip: Don’t ride your electric skateboard if the weather is bad enough that you wouldn’t ride a motorcycle or bike. 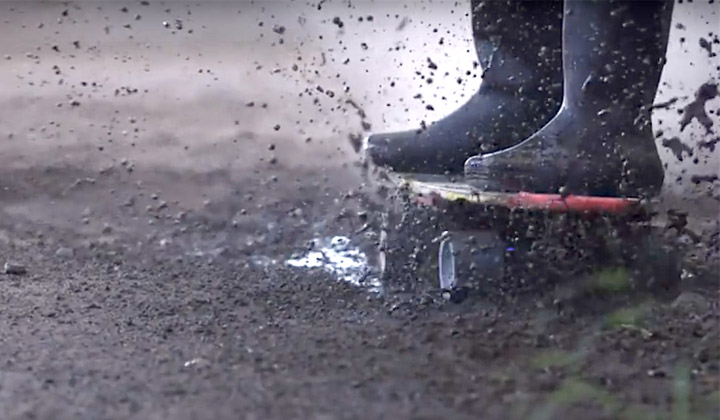 The Real Story Behind “Waterproof” Boards

Wiring and circuit boards don’t work well together with water. Most electronics are never really waterproof, though.

They are better called “water resistant” instead.

Ratings show how well something doesn’t get wet. Ratings will be given based on how well the electronics can keep water out and resist damage from water.

Again, not all ratings for water resistance are the same.

For example, getting your electric skateboard a little bit wet in a puddle is not the same as dropping it at the bottom of a 100-foot-deep lake. The lake has a lot more pressure, which will cause water to leak into even the smallest cracks in your battery and motor, which will damage them.

Let’s look at how these ratings are made.

You may have seen a number like IP65, IP56, IP52, or something else on your electric skateboard, phone, or other device.

Ingress Protection is what IP stands for.

The first number after “IP” tells you how resistant your object or product is to dust, nails, screws, and other solid foreign objects. This rating goes from 0 to 6, with 6 being the best protection against dust.

But since we’re only interested in making our boards waterproof, we’ll just look at that. 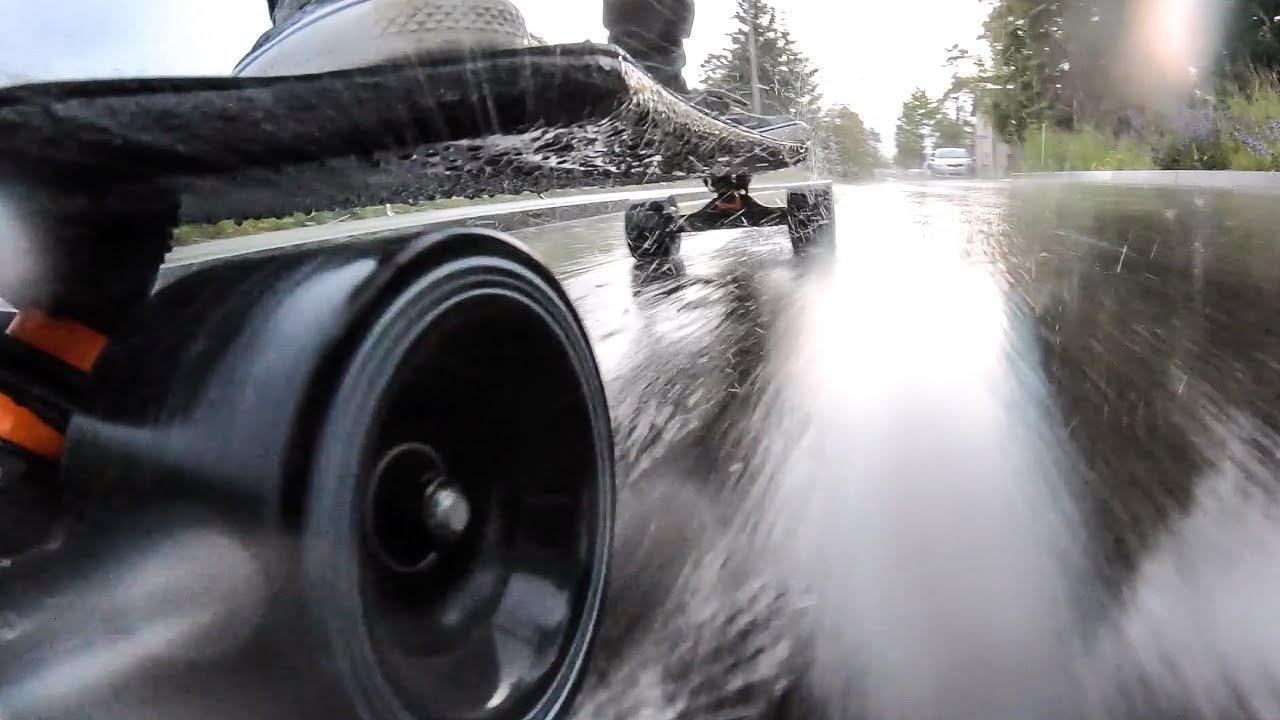 Ratings range from 0 (no protection against liquids) to 8 (full protection) (Immersion submerged under 1m of water).

Since electric skateboards aren’t meant to be submerged in water, it’s unlikely that we’ll see them with a second-digit rating higher than 7. (That means there are no IP57, IP58, IP67, or IP68 ratings.) 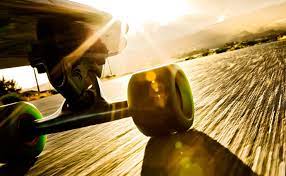 What kinds of electric skateboards can get wet?

MaxFind Max 4: A water resistance level of IP65. This is one of the best ratings you can get on an e-board. It keeps the rain out and could probably handle a hose.

Enertion Raptor 2: An IP65 rating. This e-board is very fast and has a great rating for water resistance.

Jedboard AWD: IP65 rating. It’s not the most popular board, and it costs a lot of money ($1,799), but it has great water protection.

Inboard M1: A rating of IP54 for resistance to water. Protects from any kind of splashing water, such as puddles.

Skatebolt Tornado: An IP33 rating. A little mist is fine, but any kind of rain is probably bad for the electronics on this board.

Ownboard Mini KT: The website said that their boards were waterproof, but it didn’t say how waterproof they were. Hard to believe (especially with the story I told in the intro).

WowGo 3: Ownboard has the same problem. But the website does say that the power button and charging port should not get wet. On their website, they sell something called “waterproof glue” that can help you fix your board.

Evolve Carbon GTR: No rating. On the FAQ page of their website, it was interesting to read that “we have decided not to make waterproofing a priority in our design.”

Boosted Plus: The newer Boosted boards say they can handle water, but they don’t say how well. On their website, there was also a warning: “Any amount of water can damage the electronics on the board, and water damage is not covered by the warranty.”

Meepo V3: No rating. The site says it can handle water, but it doesn’t say how well.

OneWheel: No rating. The site says the boards can handle water, but you shouldn’t ride near any water. They also say that you should dry your board off before charging it to prevent damage that can’t be fixed. 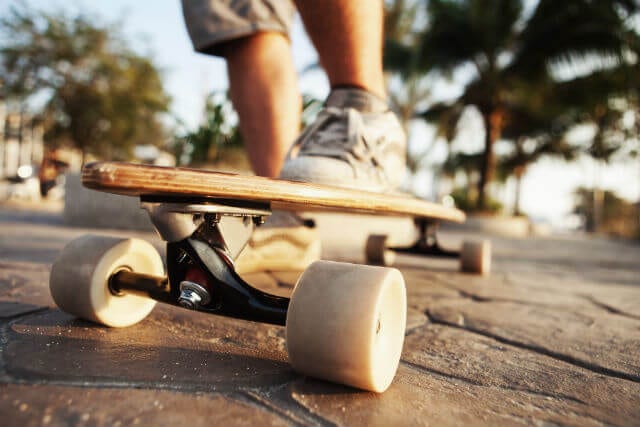 Are boosted boards resistant to water?

“Are they waterproof?” is a question often asked about Boosted boards.

Since it’s the most popular electric skateboard on the market, a lot of people question what it can do.

The short answer is… no.

Believe it or not, Boosted’s board doesn’t have an IP rating against anything.

That doesn’t mean it doesn’t protect against dust, water, and other things that might get in its way. Boosted never decided to have it tested and rated by the government.

Some of Boosted’s boards still have seals that keep water out.

No matter what, the company says you shouldn’t ride in the rain.

The main reason is that Boosted doesn’t want riders to start riding in the rain and end up with a bunch of fried boards all at once.

Considering this, I think Boosted’s board will get an IP63 rating.

What should I do about the water damage to my board?

You don’t want it to happen. Water damage has been done to your electric skateboard…

Damage from water could lead to a number of problems, such as: 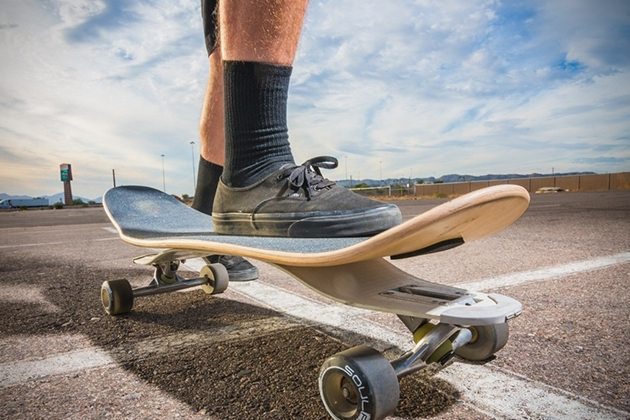 So what can be done about damage caused by water?

I really think you should read this article we wrote about how to fix an electric skateboard. It will show you all the possible next steps you can take.

Look at the warranty.

First, find out if your board’s warranty covers it. Even though it’s unlikely that a company will cover damage you caused yourself, like water damage, it’s still worth asking.

Check out the boards website to learn about the guarantees. Don’t be afraid to call the company that made your board and ask if damage from water is covered.

Even though they’re likely to say no, you might as well ask, right?

Buy the parts you need.

Second, find out exactly what is broken. Almost always, water damage happens to the battery.

In this case, the cheapest option is probably to buy parts like a new battery and fix it yourself.

I did the same thing with my Ownboard Mini KT. Now it works like brand new.

The only problem is that you’ll need to know how to connect the board to the new battery and sync it with the remote. There should still be a video of that on YouTube somewhere.

Just type in the name of your board, “replace battery,” and “connect remote.” You should also be able to find help in the owner’s manual that came with the board.

How to protect your board from water…

It’s not a bad idea, but it won’t work for long.

There are a few things you can do to make your board even more water-resistant.

First, use a waterproof sealant to fill the space where the battery meets the bottom of the board.

For the sealant, you can also use glue that keeps water out.

Another great idea is to put closed-cell neoprene foam on the underside of the battery instead of the stock foam. This neoprene foam is completely waterproof, so it will stop any water from getting into your battery.

Watch this video to learn more about how to make your board waterproof.